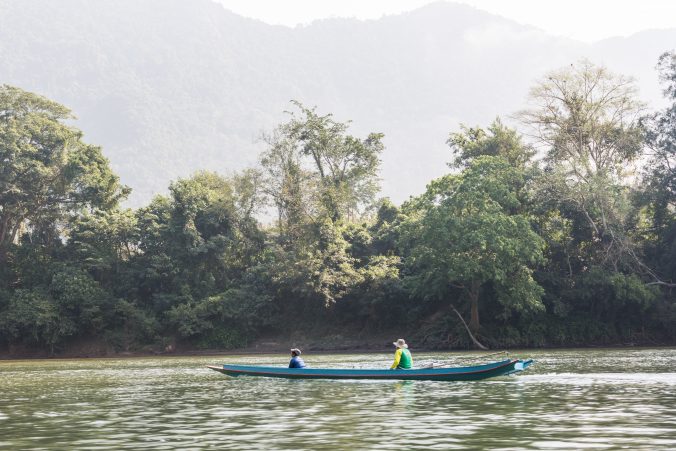 The next two days we took a boat trip up north to Muang Khua and crossed the border going to Điện Biên Phủ, Vietnam.

A boat cruise to the mountains 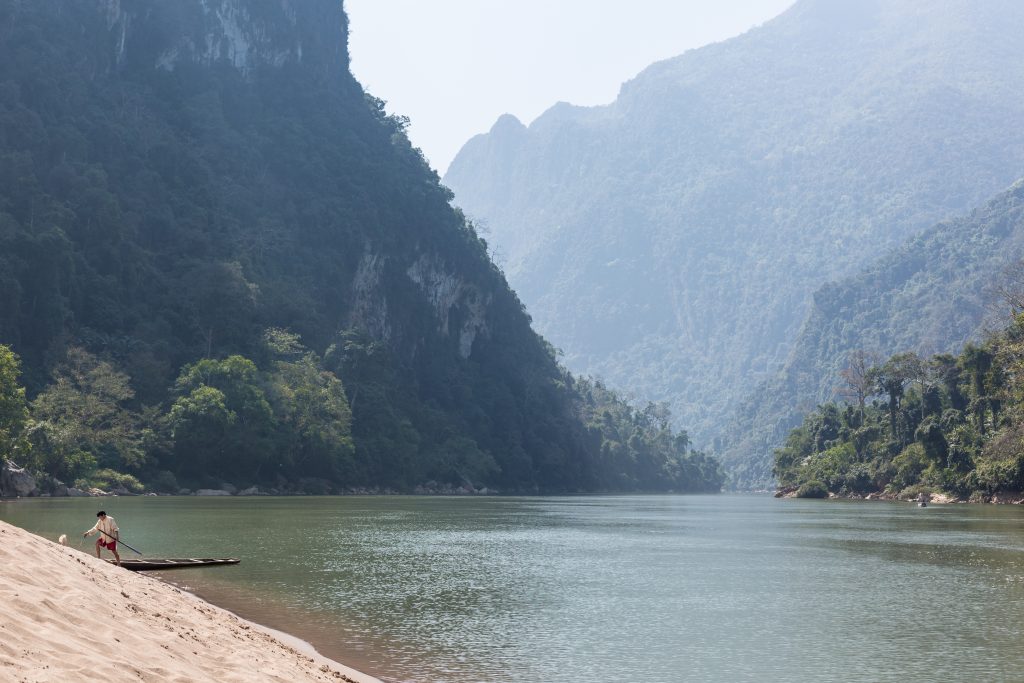 After a good sleep, we boarded a small long-boat heading north. A monk joined us for the first half-hour. He had been in Luang Prabang and asked us if we can bring him home, since there’s no road connection to his village.

We then continued our journey through beautiful landscapes with mountains surrounding us and stopped at a tourist hotspot: a village on the riverside full with hotels, guesthouses and restaurants. Our guide told us that this is a popular place for tourists to stay and go kayaking or trekking. Not too interesting for us, so we went back on the boat. 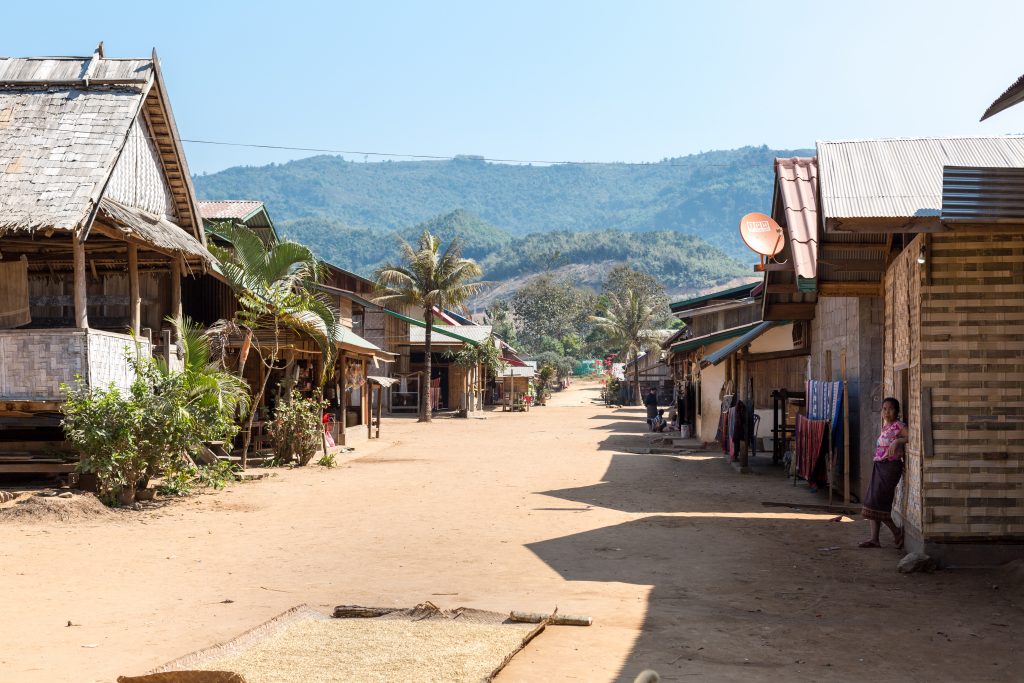 The next village was more authentic: around 50 families live in Sop Jam. Additional to agriculture, the people there also produce clothes and so there were many looms. An important invention, already quite old, but still doing a great job in Laos – simple but practical. 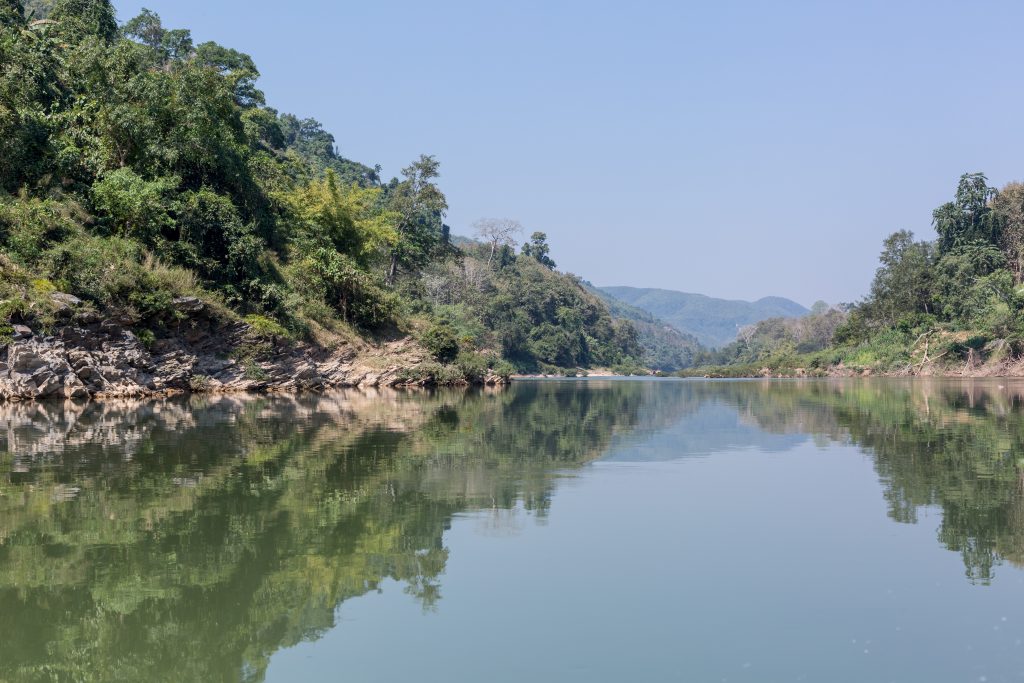 The rest of the journey basically took up the rest of the day too. We enjoyed our lunch on the boat and took some pictures, passing water buffalos, wild pigs, some smaller villages and some strong currents. In the evening we arrived in Muang Khua, a small town in the Phongsali Province in northern Laos. 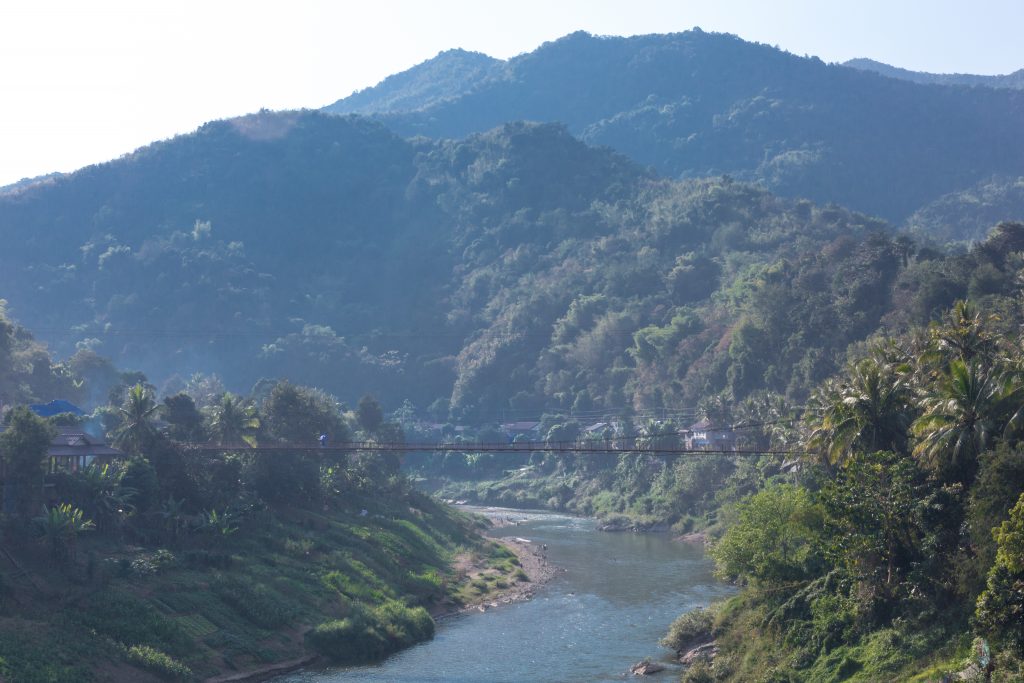 Muang Khua in the backlight

Yes, another country. We crossed the border in Pang Hoc and drove to Điện Biên Phủ, where we arrived in the noon.

Every child in Vietnam knows the capital of Điện Biên Province, because it’s where the French lost the First Indochina War. The Battle of Điện Biên Phủ marks the victory of the Việt Minh and took place from the 13th March until the 8th May 1954.

Until the beginning of the Second World War, Indochina has been a French colony. After the defeat of France, Japan’s influence in Indochina lowered the colonialists power in the respective countries, leading to a strong communist Vietnamese independence movement, called the Việt Minh. France of course was aware of this movement and thought that they can gain back control in a military conflict and so they started the Indochina War in 1946. 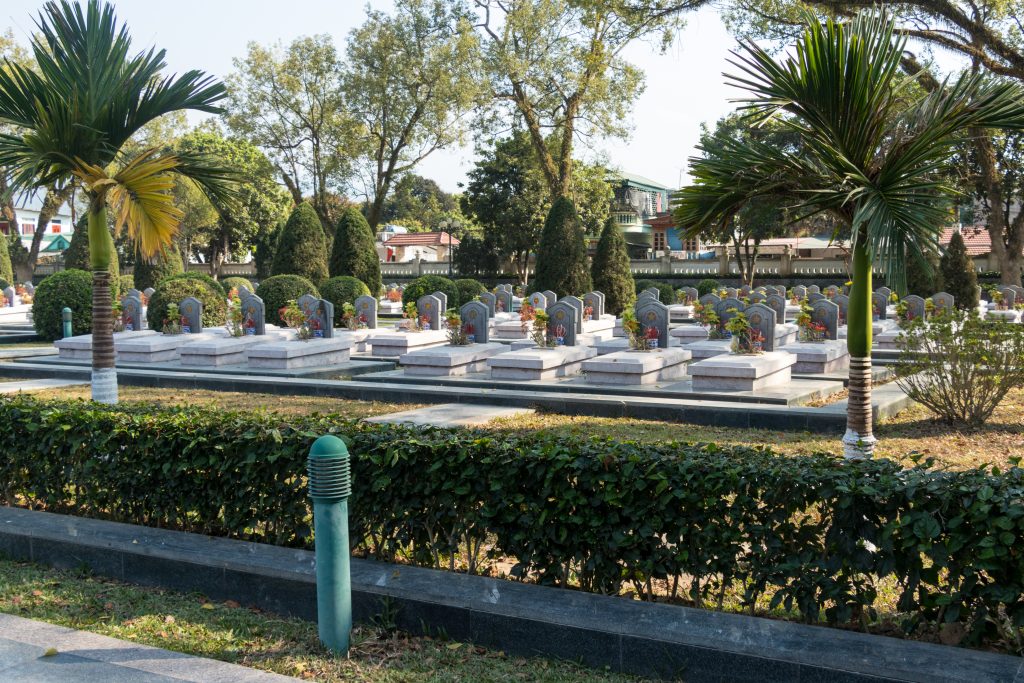 Graveyard of the Việt Minh soldiers

While being successful in the first years, since 1950 the French slowly began to get weakened by the Việt Minh and their Chinese support. In mid of March 1954, the crucial Battle of Điện Biên Phủ began with an attack of the Việt Minh. Massive destructions of the French camp marked the first victory of the Vietnamese in this battle already on the first day. After 57 days, the French gave up, loosing 3,500 soldiers and having another 4,500 injured and 9,000 imprisoned. The Việt Minh however had 10,000 death soldiers and another 15,000 wounded.

After the Battle of Điện Biên Phủ, the Indochina Conference in Geneva took place, leading to the Việt Minh living in the North of Vietnam, while the western states including France kept control of the South. Additionally, Laos and Cambodia got independent and the Indochina War has ended. 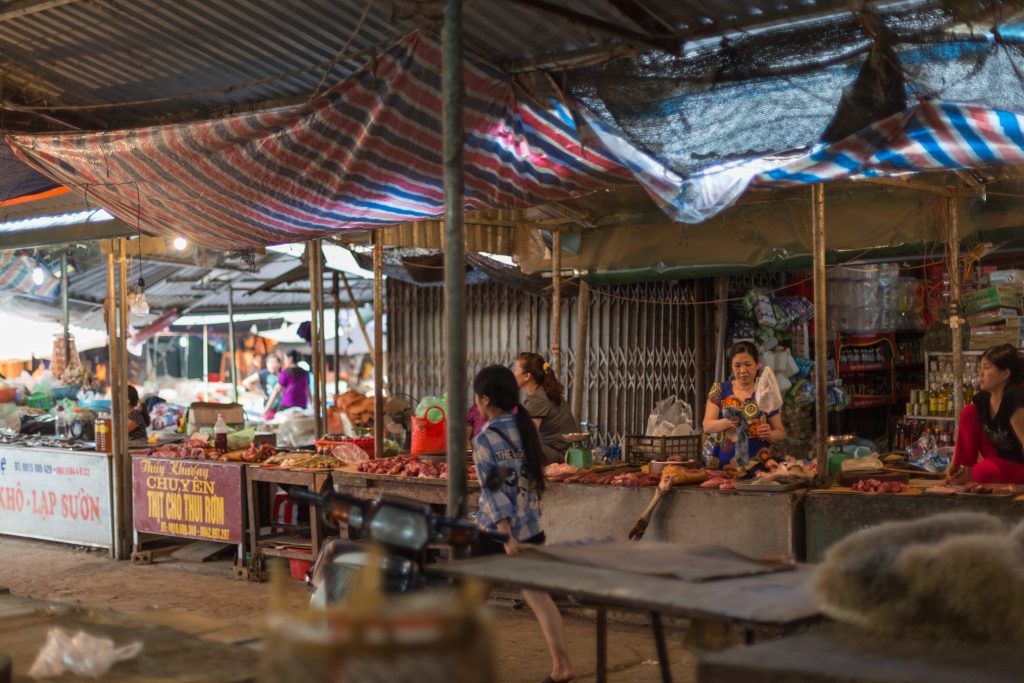 After arriving in our hotel, we first needed to get some Vietnamese money, and wanted to learn something of the history of this town. Sadly though, that meant an one hour walk into the town, since Điện Biên Phủ is not really a touristy place. That also meant, that English was rarely spoken. Still, we decided to visit the graveyard of the Việt Minh soldiers and then made it into the gallery containing arms, photos and more of the historic battle.

Finding a restaurant with an English menu turned out be a challenge too. Finally, after looking around for almost an hour we found one. And then – private room dining for around 12€, and since we had no lunch, we were hungry. Try to find this in your home country… 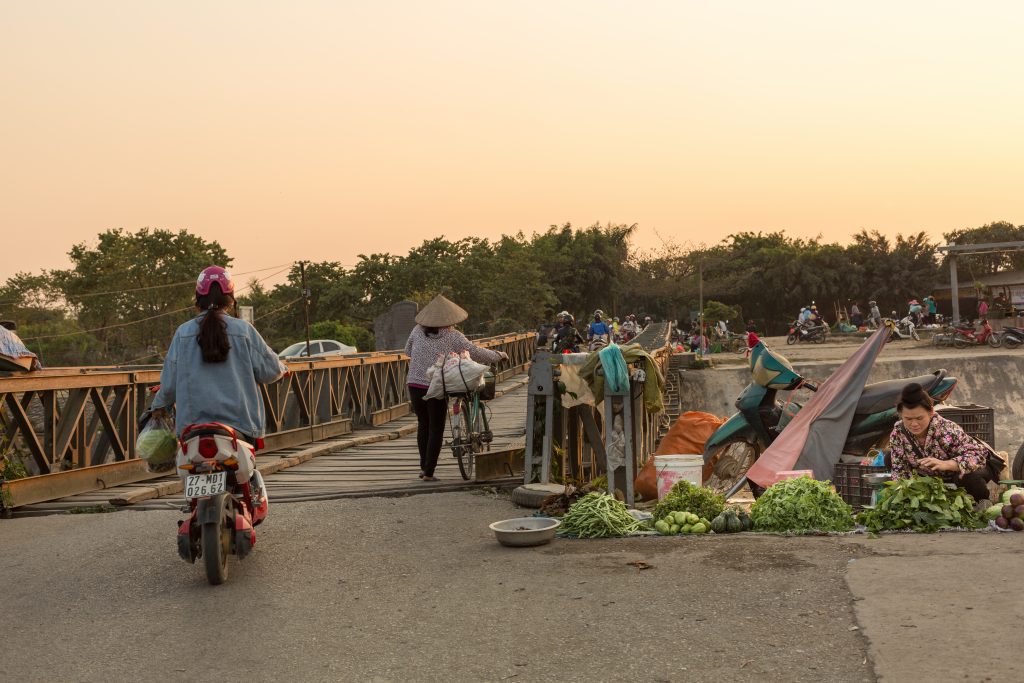 Luckily, after a good night we continued our tour to a town where English is a language you can communicate with – but more of this soon…