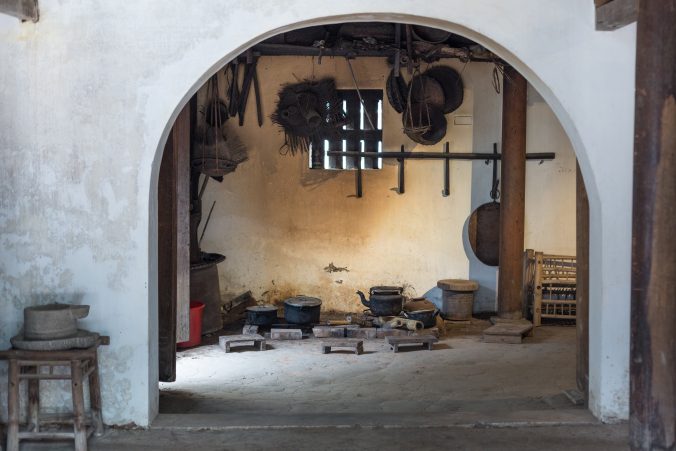 Another train ride brought us to the oldest capital in South East Asia, located in northern Vietnam. 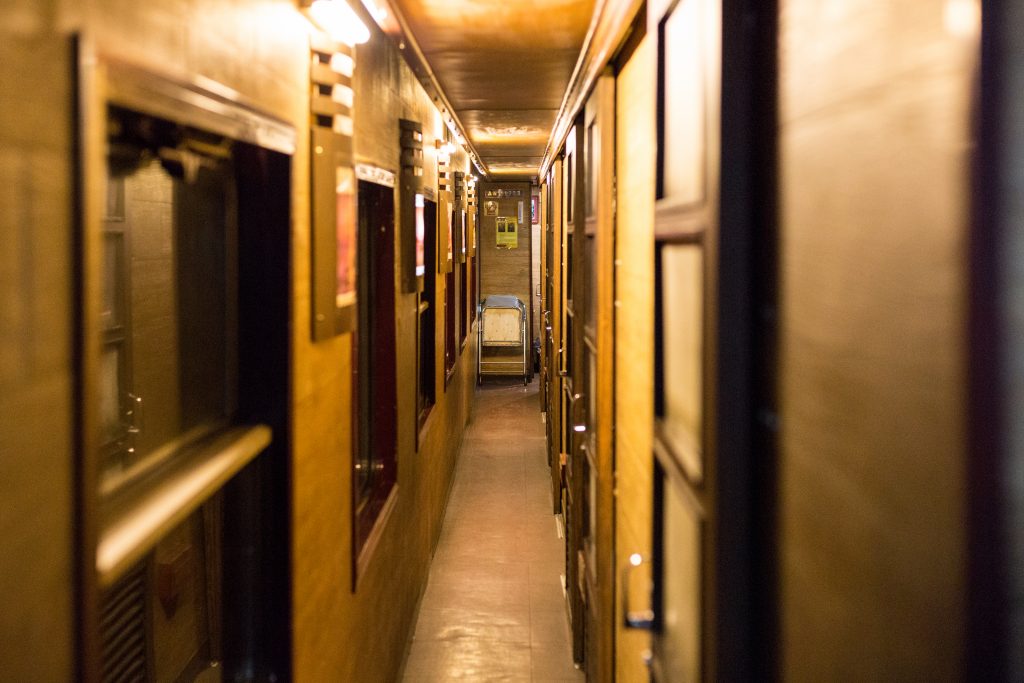 Wood-clad facade of the sleeping car

…okay, that’s maybe a bit exaggerated. But it’s quite enjoyable onboard the King Express Train from Lao Cai to Hanoi. Sleeper wagons with two- or four-people cabins are offering you a comfortable ride overnight. At least I had a good sleep and I prefer it over the train travelling to Bangkok from Vientiane. So we arrived in Hanoi in the early morning and after breakfast, started our first roundtrip. 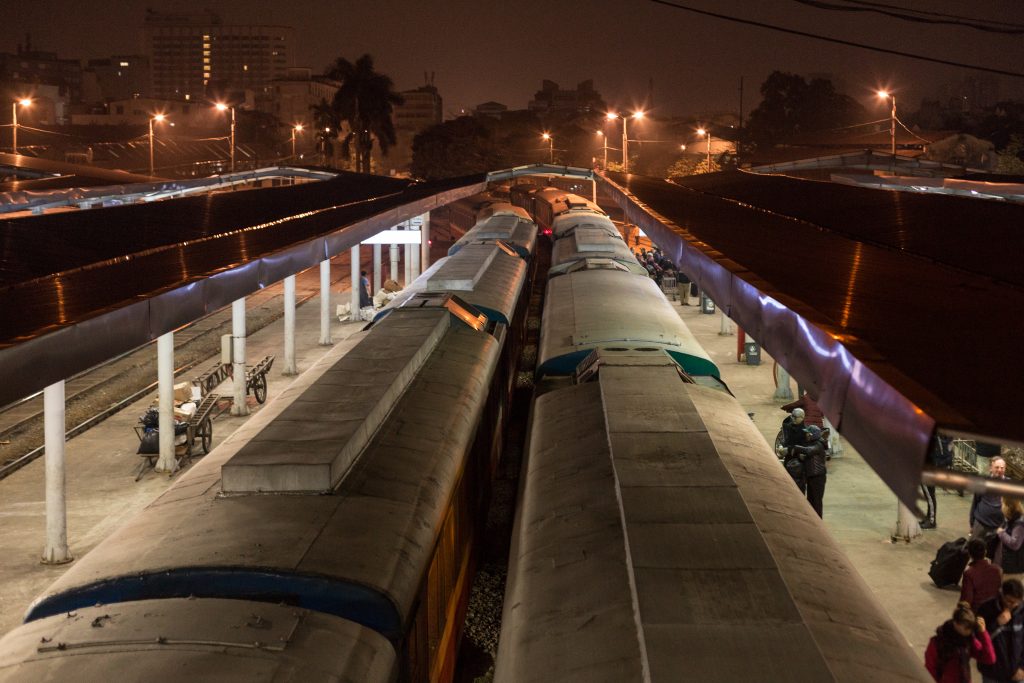 arriving at Hanoi station at five-something in the morning

Our first station was the Vietnamese Ethnology Museum. Having a very crazy taxi driver talking about very disgusting topics we arrived there in the early forenoon.

The museum focuses on the Ethnic Minorities that can be found in Vietnam, but since many of them live in other countries as well, it’s more multi-national than Vietnamese. We learned about the living styles, the clothes, the traditions and the history of several groups. That includes the Hmong and Khmu, that we already met in Laos. But also new groups, like the Nung Loi, the Yao or the Lolo. Talking about all of them would be far to much now, if you’re interested, give the museum a try. Many movies, maps and local tools, clothes and furniture made it very authentic and descriptive. But our highlight of the museum waited in the backyard… 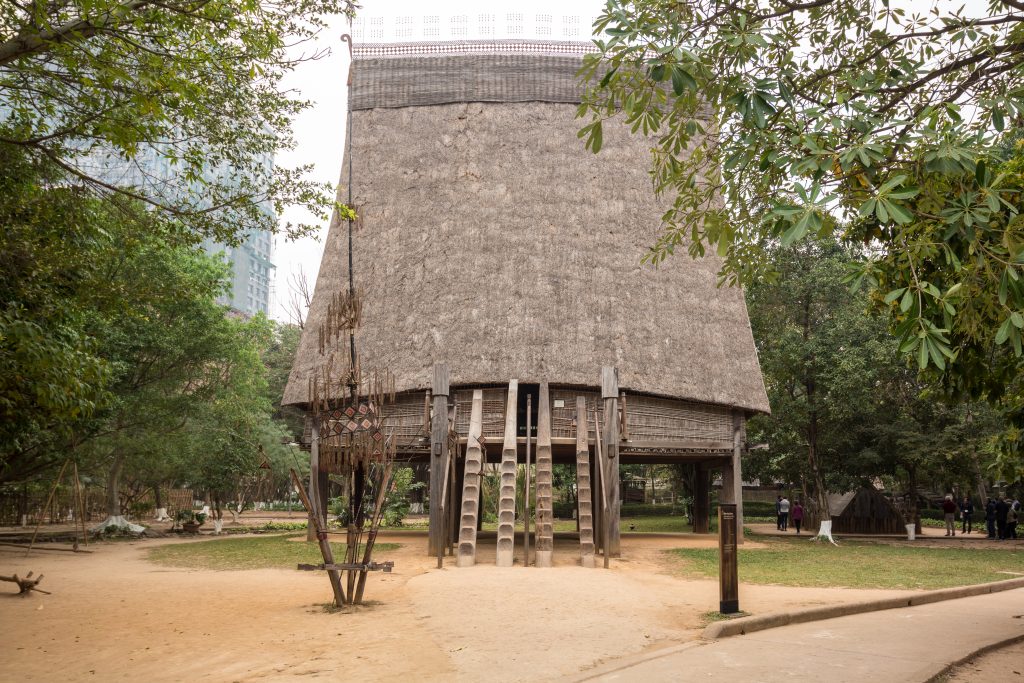 There, you can see the traditional houses and even go inside. They’re completely furnished and one is more impressive than it’s previous. Some are really inspiring, some just funny, some only stunning. A must-do in Hanoi!

Beautiful pagoda and the Holiness of the Classless 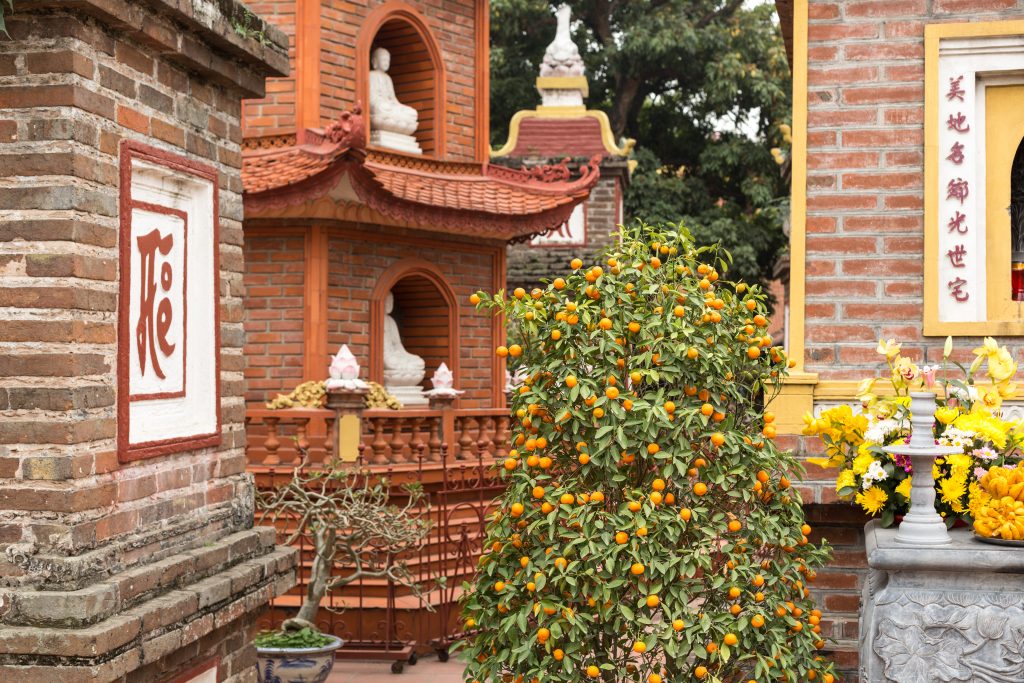 We then drove to the Trấn Quốc Pagoda located in the Hanoi West Lake, one of the most beautiful pagodas I’ve ever seen in South East Asia.

The last point of interest on this day has been the Ho Chi Minh Mausoleum at the Ba Đình Square. Since it was closed and, of course, strongly guarded, we only checked it out from the outside.

It’s a bit funny. I don’t want to open a discussion on socialism in this blog. But isn’t it a bit ironic to treat someone like a holiness while having a classless society? What adds to this is that Ho Chi Minh itself never wanted to be treated this way, he didn’t wanted to be embalmed. Nevertheless, they did it and now people can walk around his dead body on a few days per week. 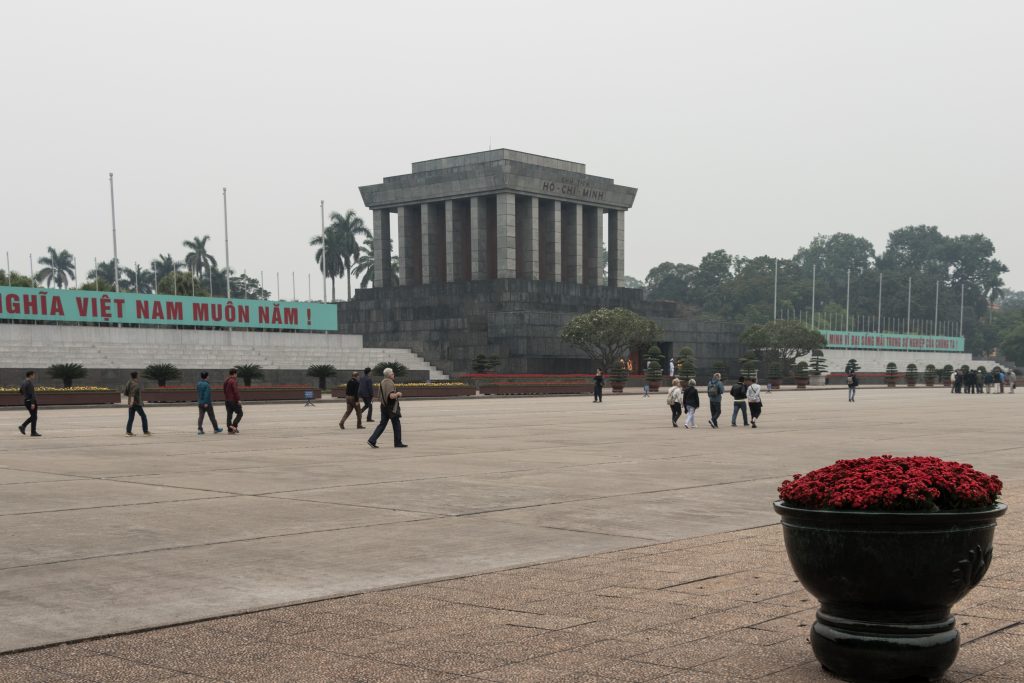 After checking out the news at the German embassy (why? we don’t know either) we searched almost an hour for a restaurant for dinner. Then, found a nice one and enjoyed Vietnamese Dinner on the floor.

Temples, a Prison and no train

A Temple marked the start of this day: the Ngoc Son Temple in the Sword Lake, Old Quarter. Beautiful as well, the grey combined with the red and white accent even fits modern design taste.

The “Hanoi Hilton” wasn’t our luxury hotel for a lazy rest, but a historic place with only a small similarity to a hotel. It’s also called Hỏa Lò Prison, which explains its use: build by the French in a former local village it has been build to arrest resistance fighters during the colonial time and the Indochina War. Then, at the Vietnam War, the socialists used it to imprison shot-down American pilots. A popular inmate you might know is John McCain.

Sadly, the museum is created quite one-sided – not that I’ve expected something different. Most of the time it’s: the evil Western people vs. the patriotic Vietnamese Heros. But it’s still interesting to see, since the building is nearly in it’s original state, except a major size reduction due to need of space for a new building. Visit it and make your own opinion out of it… 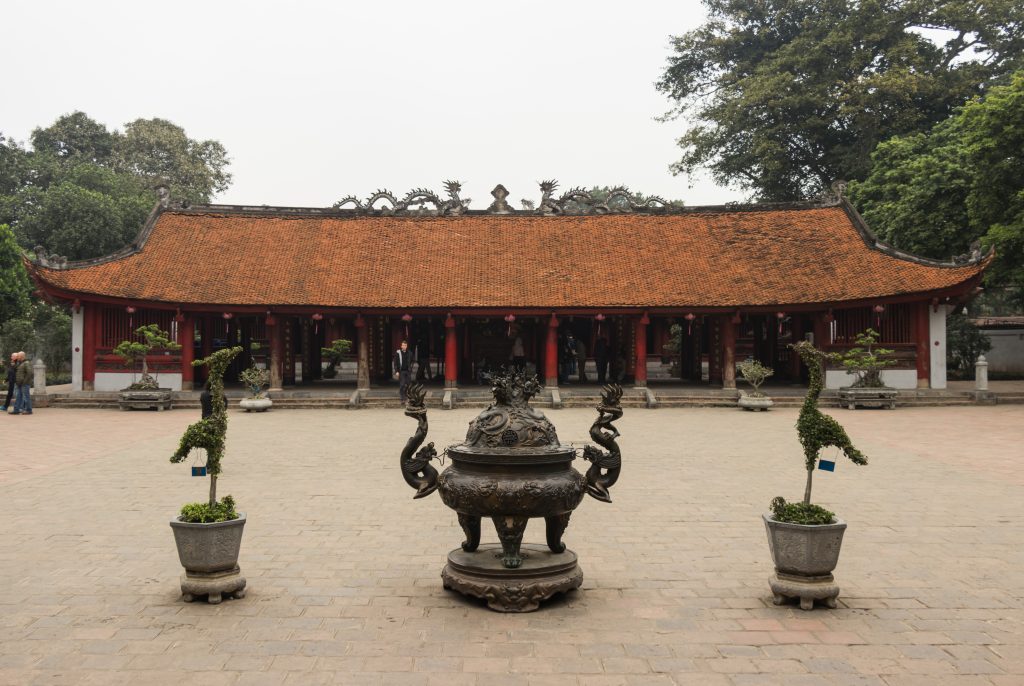 The last sight has been the impressive Temple of Literature, also called: Quốc Tử Giám. It’s the most important one of the Literature temples in Vietnam and is a UNESCO Memory of the World Programme. Quite big, very nice and easy to visit it must be on the schedule of every Confucius-interested traveller. Sadly, we only had the chance to take very few pictures.

Originally, we wanted to visit another train attraction after lunch. Located next to the Old Quarter, there is one train track passing houses at a very close distance. A nice picture spot and a bit comparable to the impressive use of space of the Train Market in Thailand. Unfortunately, the train didn’t arrived as scheduled and we had to leave for our flight back. Still, some nice photos had been taken. 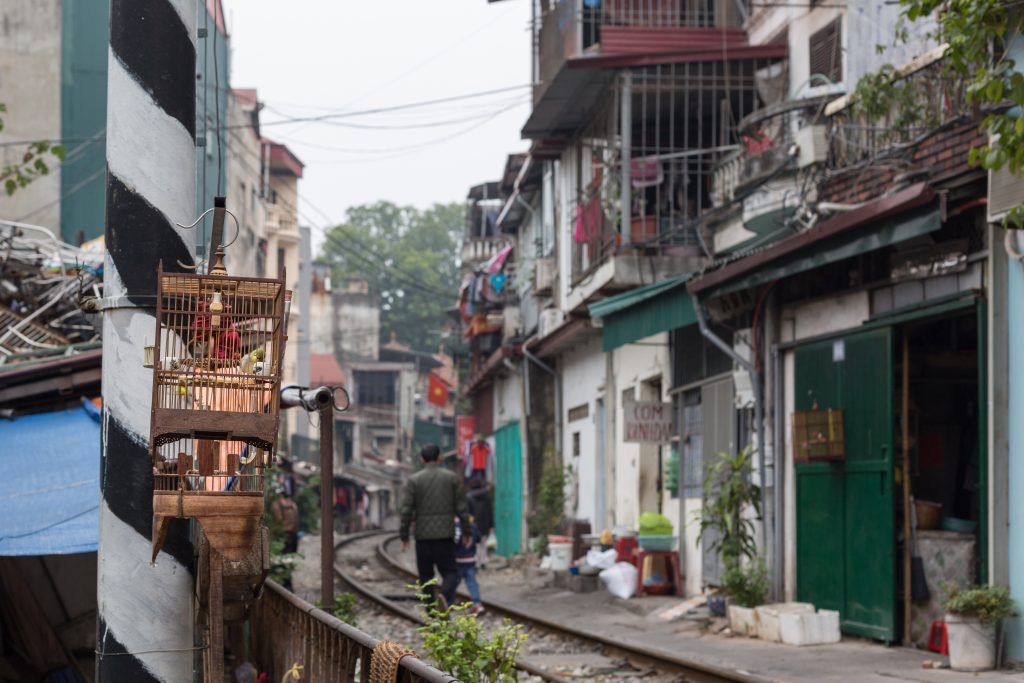 Future of Aelizebeth in Laos

For me, Maxi, this has basically been the last blog post on Aelizebeth in Laos. University called me home and so, I had to leave three days later. Matthias still stays a bit longer.

I might write another summary of my time in Laos soon if I’ll find the time for it. Anyway, it’s been great to make this experience I can only say a huge “Thank you” to everyone who inspired us, helped us, motivated us and made this experience possible. That includes you, our fellow readers, it’s been a lot of fun sharing our experience with you.

Of course, Aelizebeth will continue to exist normally, and I will continue writing blog posts as well. And maybe, Matthias adds another Laos post as well…

Note of thanks – AiL short