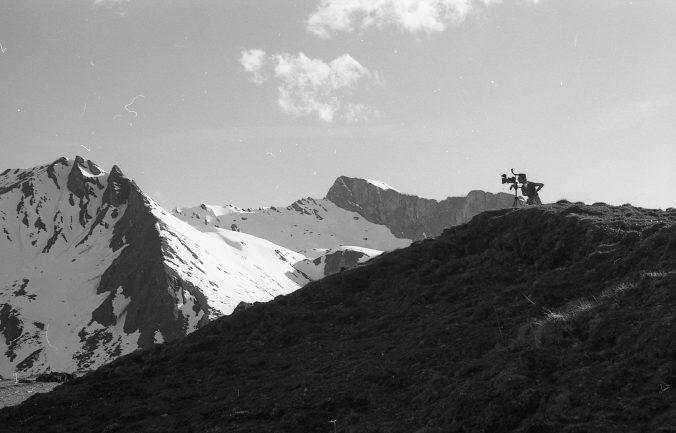 In spring I got a lab for b/w film development, than I got me meters of film and since december I have a film scanner. I even tried C-41 process for color negatives once, but it’s more tricky, time and money consuming and in particular more annoying. So have fun with a lot of greyscale!

For this session I used the same cameras and films as in the second part. For more detail: click!

More interesting to discuss IMO for this post are the motifs. On the one hands side we have the classic motifs of landscape photography: the mountains; and city: architecture. On the other hands side we have some third person shots, I often take to give  the viewer (yes, you) a taste of the moment. Furthermore good to mention right here since the three examples in this selection are different each: The passive viewer, the active photographer and the same again but this time at the same layer as the background.

I have putted them in order so I hope everyone should get what I was trying to say here. (^^)

And last are some multiple exposures. The first shows an orchestra and a chandelier, the scond is even a ten time exposure of a street in Vienna… yea, thats more an artificial one.

All pictures where taken in the austrian states Tyrol and Vienna.

Aelizebeth in Singapore – Part 1: Marina Bay and the Clarke Quay