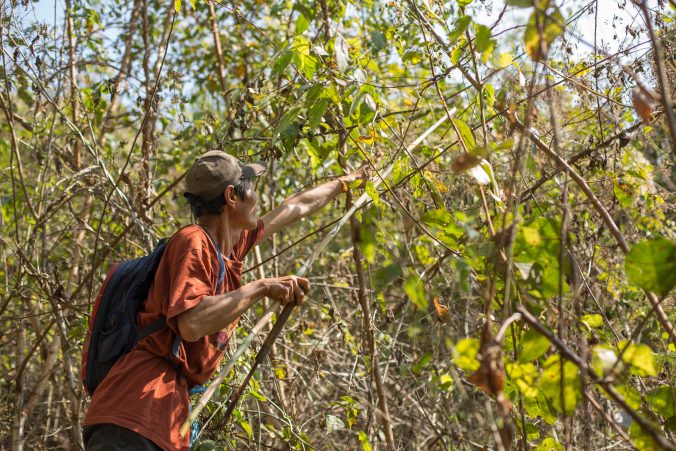 We have been on a homestay with Fair Trek a few weeks ago. Guess what: We did it again. This time we combined the second Eco Bungalow at Nong Khuay village with a two day trekking tour. Basically we did just the same as a few weeks ago: We booked us a bungalow tour in consultation with Fair Trek. But since this bungalow doesn’t run with AirBnb, things went a bit different this time.

So lucky you! – Here we go with an all new story, and I can’t just copy the old post… 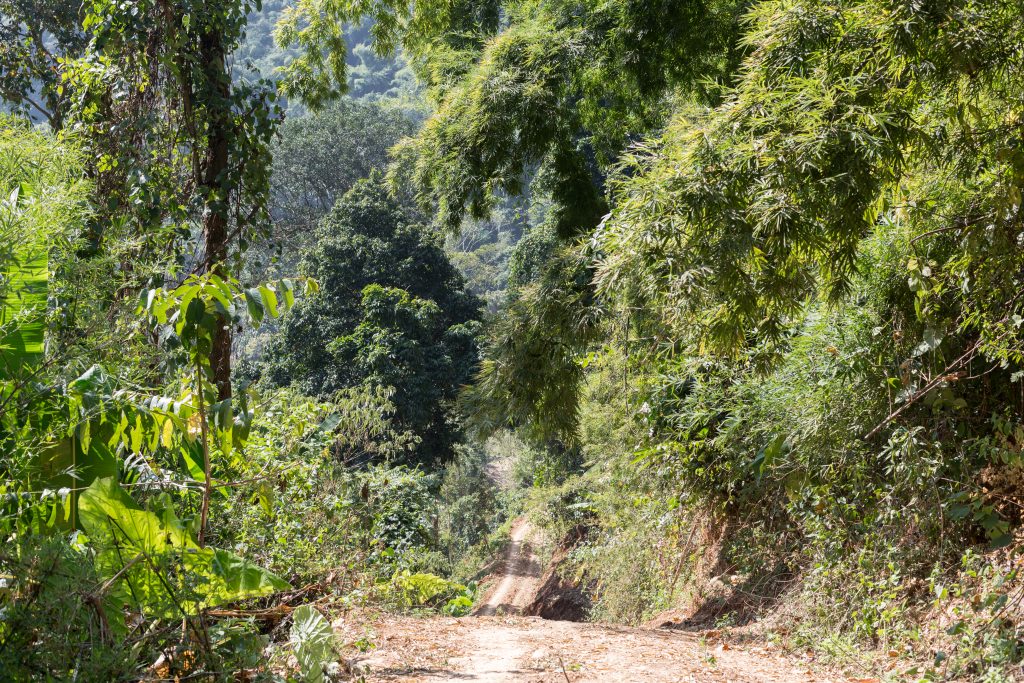 We met with our guide in the morning. Surprisingly, we already knew that guy from the opening ceremony of that bungalow (sadly we wrote no post about this party). After we got sandwiches for lunch, we went on the one hour ride southwards down Highway 13 to the starting point of the tour. 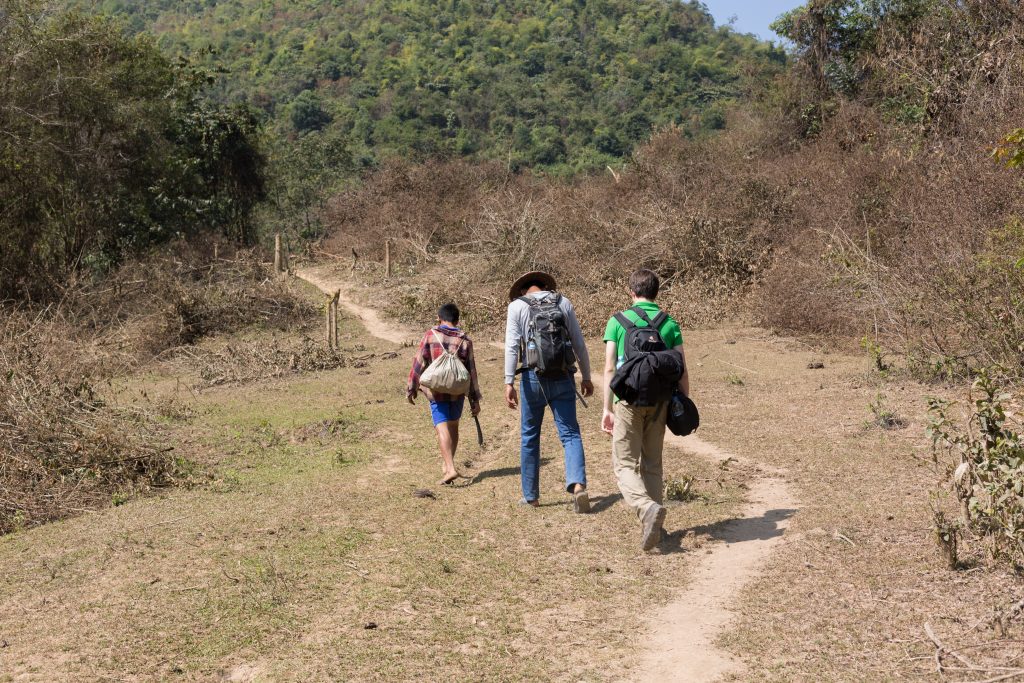 woods are prepared for burning

There, a local guide (a boy from a cow farm) waited for us, because even our guide made the tour for the first time. The tour is simply quite new. From the road it took us into the hills. The sun was burning and the path was steep. Almost at every shadow we paused. The path leads along a trickle, which carries a lot of water in the rainy season. 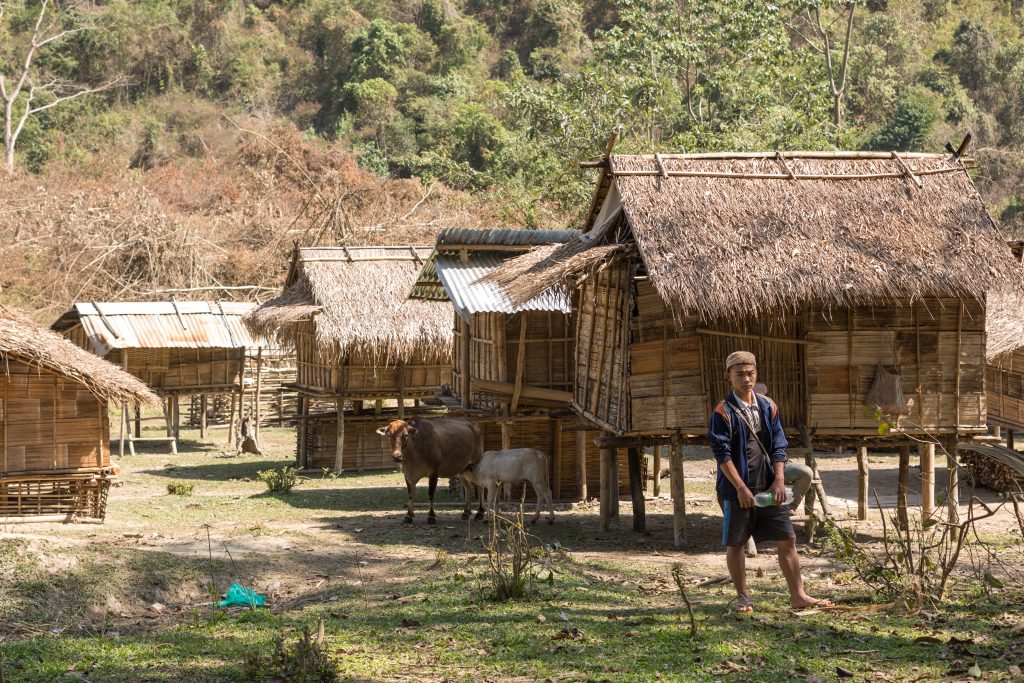 After a few hundred height meters we reached a Hmong peasant village.

From there, the path was flattened and there was time to enjoy the landscape and snatch some information from the guide. Hiking to Nong Khuay took us almost 4 hours. 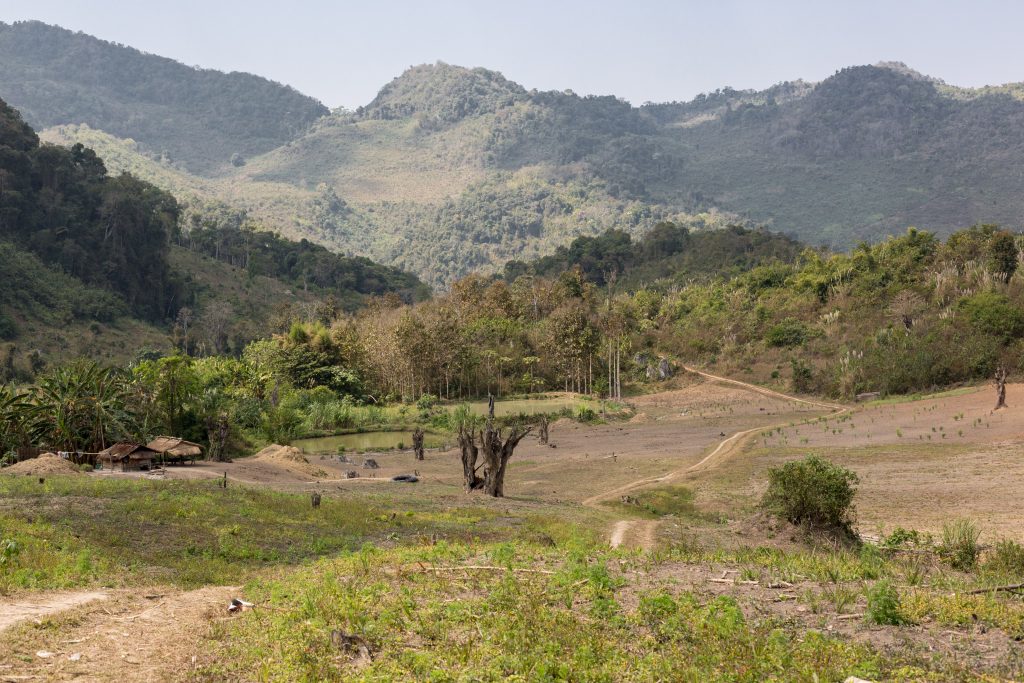 Living in the village – the Fair Trek experience 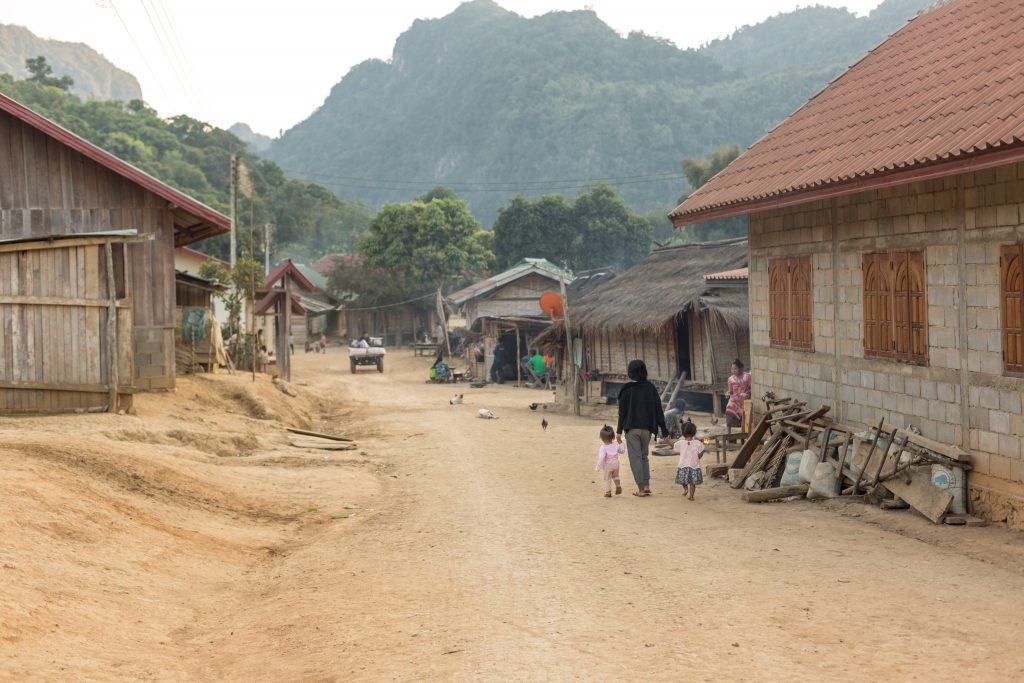 The chief of the village and his family welcomed us with some food inside his house. After that we visited the village. The Hmong and Khmu parts, the sheriff and some other familys. We even met the local hair cutter. 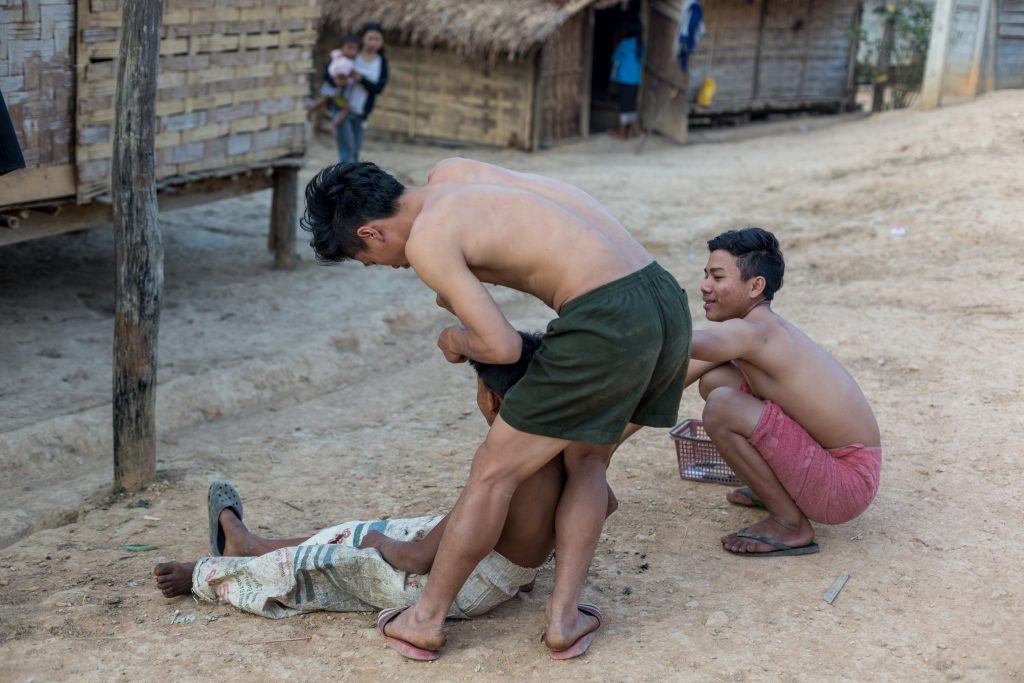 boys cutting their hair after shower

Lunch was one of the highlights. We got food from a local family and they took us inside their house. Of course we got sticky rice and on top a hand full of veggie dishes based on bamboo and pumpkin. It was really different from what you can buy in a restaurant in Luang Prabang. Our guide emphasized that the second difference is that those vegetables are organic, while most of vegetables in Luang Prabang are bred with chemistry. And so we came into table-talk about traveling, culture, sports (football, football, football), differences between Laos and Germany, even politics and religion (which can be poison for good conversations sometimes) and especially grewing up in Laos and living in the communitys. The idea of different ethnic groups sharing the village without escalations and what impact each culture of those ethnic groups has to this. All in all it is pretty enviable how communities are working and people providing each other. The village of Nong Khuay is a great example, since Hmong where used to grow opium a few decades ago and had to reinvent themselves (forced and provided by the Lao government) in order to gain a foothold in modern times. Today they grew things like Lao Arabica coffee for export (and on their own they drink Nestle instant coffee…). 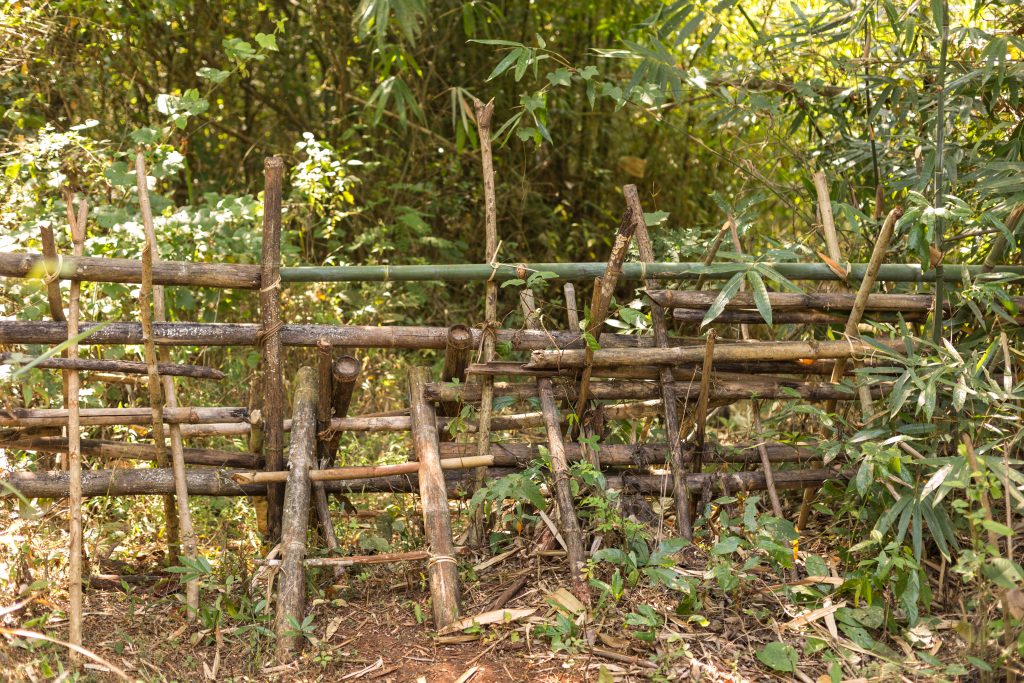 Breakfast made another chance to get some veggie, organic, local and tasty food combined with sticky rice. And it won’t stop. Even as we continued trekking with our host family’s father (cover photo) as local guide we got a lesson in local fruits, veggies and herbs growing all along the way down (there was a lot of up within) to Ban Long Lao Mai (you may know). There were several types of bamboo, used for nearly everything.

There was wood used as nutriment for women after giving birth. There was a berry that tastes like pepper, some leaves for spice and some that are even said to be antibiotic. And there was plenty more. Our guide took out a bag and carried all this inside to cultivate it at home. 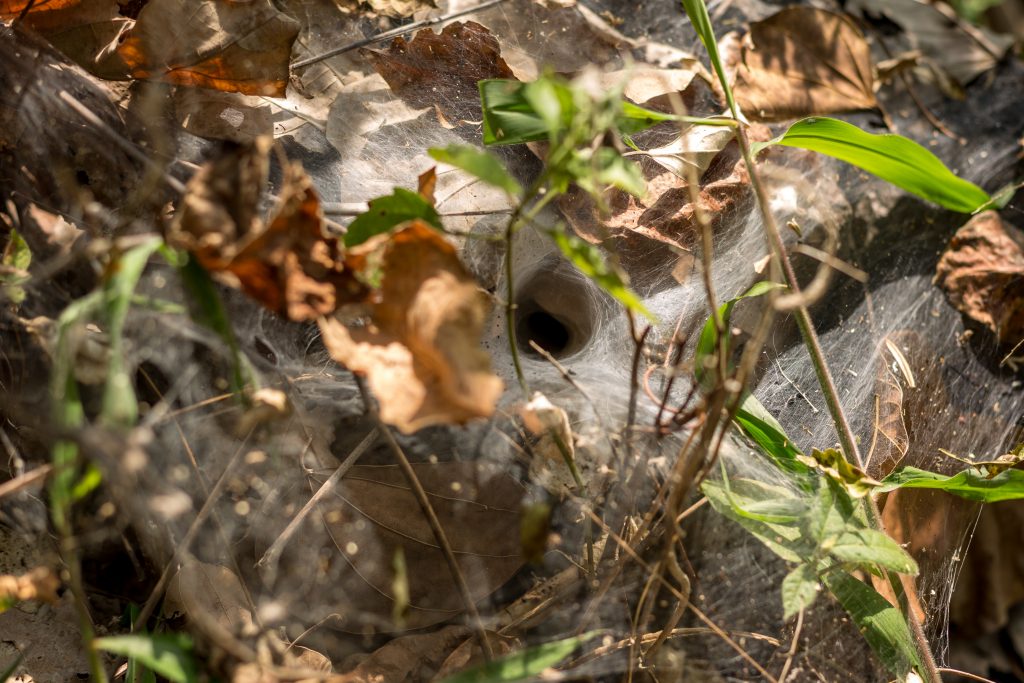 characteristic habitat of the hobo spider

Besides the path every two steps there was a funnel net from some hobo spiders. Some cows followed us from time to time and we met some children from the surrounding villages.

dog on a farm

After a cattle farm our local guide left us. That was maybe an hour before we arrived at Ban Long Lao Mai where a car took us back to Luang Prabang.
Thanks again to the Fair Trek guys for sending us up there. We can highly recommend this tour to anybody who is ever around Luang Prabang. This experience is kind of unique. 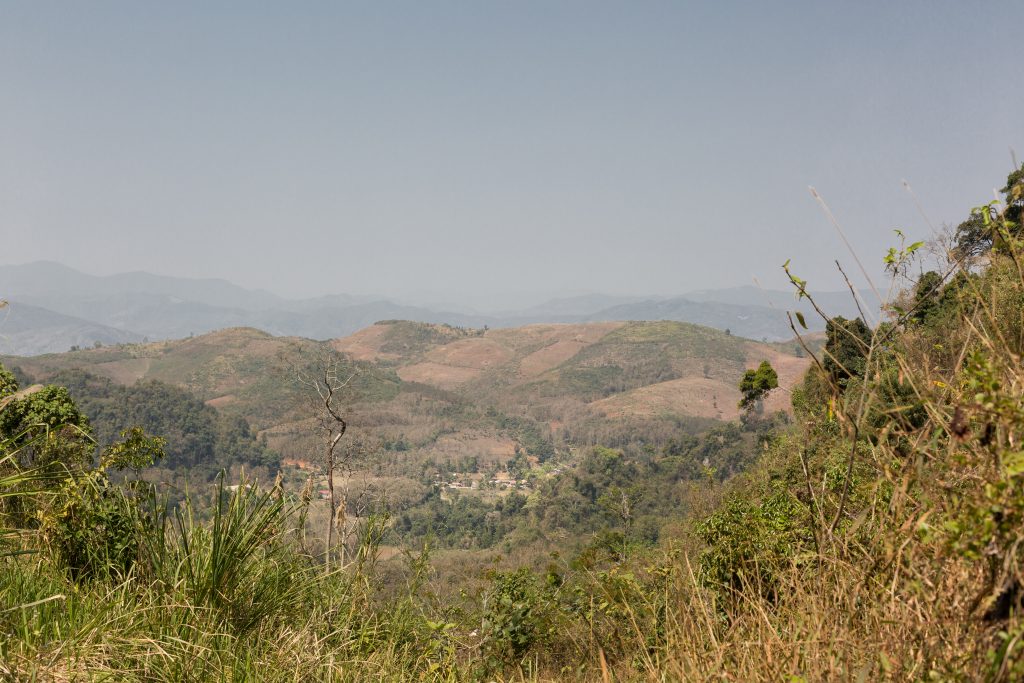