Recently I’ve had a spark of inspiration and came up with some designs which I thought might look pretty neat on a shirt or a hoodie or whatever. Since that was something I wanted to get into for some time now anyway, I thought I’d share those here. So… yeah. Here are four designs I made. 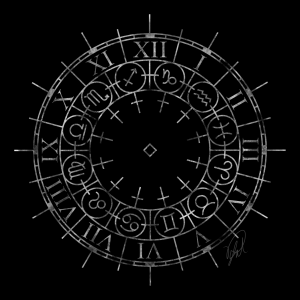 “clock face” is a weird term

That’s the first design I had in mind. It’s basically a clock face, only that the twelve zodiac symbols are also integrated. In astrology every zodiac sign corresponds with about 30 days of the year inbetween two months, which is why I decided to place the signs like that. Astronomically incorrect but that wouldn’t work anyway, since there is actually one additional constellation in the ecliptic. 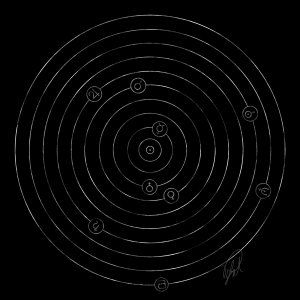 Circles are really round!

This design is supposed to be somewhat of a simple representation of our solar system. The proportions might be a little bit off (or maybe actually not realistic in the slightest) but the constellation of the planets, represented by their astronomic symbols, is actually (a bit vaguely) set on a specific date. So look for a solar system simulator and try to figure out which date it is. If you find it out you’ll get nothing. Not even a note that reads “congratulations”. But feel free to try anyways. 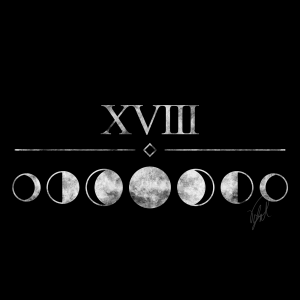 As you might be abel to figure out, this design shows the moonphases (without the new moon). At first I thought I’d leave it like that but than I decided to add something on top of it. I recently looked up some things about tarot cards and their designs (turns out there’s more then just one set…) which is why I thought: “Hey, let’s get a bit esoterical” and decided to put the number 18 on top, which is the number of the tarot card “The Moon” in the so-called “Major Arcana”. 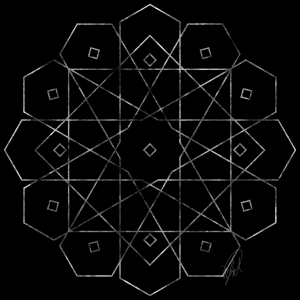 This design isn’t that symbol heavy as the other ones… I just experimented with some symmetric stars and shapes. Although one could interpret some meaning into this (and especially the first design), that might or might not have something to do with the game I’m working on..?

Teepublic is a thing…

Well that’s it for now… I’m not sure wether I’ll make more designs or not. That’s entirely depended on another sudden inspiration I guess. If you’re interested in the designs I posted here, you can buy them on https://www.teepublic.com/user/riff05 (without the signature of course)

So… feel free to do so. Or don’t. That’s up to you to decide. Also the designs will be up for sale in the first 72 hours so grab them while they’re fresh, if you know what I’m sayin ( ͡° ͜ʖ ͡°)

EDIT: The sale is over but you can still buy them for the normal price :^)

Note of thanks – AiL short