Just gonna drop this here for a little update. I actually finished this drawing way back in november but I wanted to finish another character before posting this… Well that takes too long because I am not satisfied with myself >:( 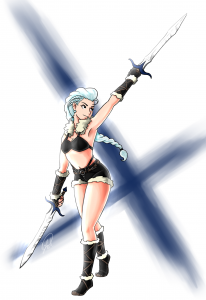 This is Hilda, a dual wielding, the cold withstanding, messanger of death!!! (Now that’s some edgy shit right there! FUCK!)

The name “Hilda” derives from “Hildegard” literally meaning “fighter” (Hilde/Hilda) and “guardian” (“gard”) and also literally “Valkyrie” so… My naming conventions are not the most original ones, I know…

I’m still trying to practise perspectives, poses and especially movement in this one. I also tried to keep the background simple and give it a rather “cold” feeling…

I actually started this drawing in anticipation of the winter. It is winter. But theres no snow in sight! Wtf, weather? Fuck off!!!

As for the RPG, I’m triying to focus on the battle system for now since it’s, not surprisingly, a major part of the game.

The main concept I had in mind for it is, being able to use as many characters as possible. For me it made little sense that you’d have for example 6 party members but you’d only be able to use like 4 of them in battles. Sure you could just switch them out in some games even during the battle but honestly, why wouldn’t they all fight at once?

The RPG Maker only supports a maximum of 4 party members in total (!) so I figured I should go ahead and make my own battle system… Even if I could realise some other ideas I have for the battle system with the given one. But the thing about the party members is just to important to me.

My approach on the charcters this time also has a focus on the battle system. As I said before, I try to think of their abilities etc. in battle first and try to develop their history and also the main plotline around that.

Once I’ve finished some more of the drawings I’ll be going into more details about the battle system. As for now, I just wanted to post something here before I completely forget about it… There are still some drawings I want to finish before the end of the year (only one week left… oops) so stay tuned for more unoriginally named characters!

Ae|nalog in Laos Vol. I